Disneyland Paris, like all Magic Kingdom parks, starts you off with a representation of the century idealized American small town life.  Also like the other parks, it allows you to experience a grand unveiling as you enter the park much like the opening act of a movie or theatrical production. 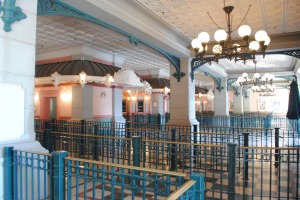 A major difference will strike you immediately: the entrance gates are actually on the ground level under the Disneyland Hotel.  Entering this way is particularly striking, because the hotel is quite beautiful itself as well as the fact that a view of the park is completely hidden until after you enter. 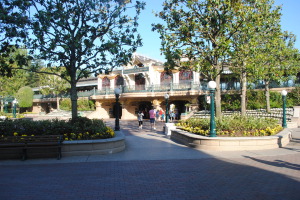 As you enter the main gates, the park is still somewhat hidden.  A small plaza sits on the far side of the gates, and you approach the Disneyland Railroad Main Street Station as you cross the plaza.  Crossing the tracks via tunnels underneath, you get your first view of the park itself.  The layout is generally very similar to other Magic Kingdom parks, with a circular street on the entrance end, a long straight street, and terminating in another circular street at the hub.  It has the center cross street here as well.

A major difference are the Liberty and Discovery Arcades…arcades in the traditional sense, not the kind with video games!  These covered walkways run parallel to Main Street, at the back sides of the shops.  The Liberty Arcade is on the left as you enter (West) and the Discovery Arcade is on the right (East).  All the shops have entrances to the arcades as well.  The Arcades provide easy access to travel the length of Main Street while avoiding the bulk of the crowds, particularly if it is close to a parade time.  They also provide great shelter in the case of inclement weather, something not unusual in Northern France. 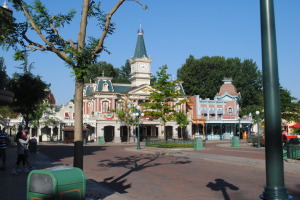 Let’s walk down Main Street and examine the locations on the West side of the street.  Starting in the train station plaza, you have the City Hall on your left, which has the same amenities and services found in every City Hall at other Magic Kingdom Parks.  Attached on the right hand side is a small book store called The Storybook Store.  On the left side of City Hall is the Arboretum, which is pretty much just the restrooms.

Continuing around the left side you have the South entrance to the Liberty Arcade, which gives you easy access to Frontierland and Adventureland, as well as the rear entrances to all the shops on this side of the street. 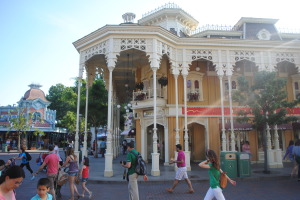 Next is a sight familiar to Disney Parks visitors around the world: the Main Street Emporium.  Like its sister stores around the world, the store actually extends quite a ways up the street.  Other facades, like the Main Street Gazette and Bixby Brothers, may look like different stores on the outside but are all part of the Emporium on the inside.  You will find all the typical merchandise, including clothes, plush items, and other souvenirs. 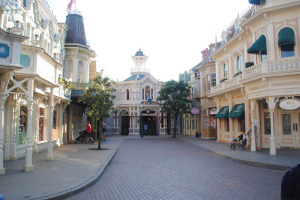 When you reach the Center Street on the left, you have an entrance to Liberty Arcade labelled Liberty Court.  Tucked away at the back on the left is Dapper Dan’s, “For a haircut & shave just like the good old days”

Next is a unique restaurant to Disneyland Paris: Walt’s – An American Restaurant.  It’s a table service restaurant, where most of the tables are actually on the second floor.  This provides a unique perspective on Main Street while dining, especially if it’s a parade time.  The food is “Refined American Style cuisine.” 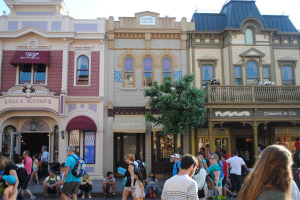 After Walt’s (at least on the street level) is another conjoined store, Lilly’s Boutique/Disney & Co., which is continuous on the inside and again offers an assortment of souvenirs.  Lilly’s Boutique has a bit more of a focus on kitchen and cooking items.

The last location on the West side of Main Street is another familiar location: Casey’s Corner.  Like other similar locations, it offers a Quick Service menu that centers on Hot Dogs, Fries, and soft drinks.  Betcha can’t guess what brand!

The far side of the facades provides the North entrance to the Liberty Arcade.

The next post will detail the East side of Main Street, and then we will progress around the park, examining the similarities and differences at Disneyland Paris.  Feel free to leave questions or comments!