A long time ago I had a dream. I dreamed of being able to relive the history of the Disney theme parks. To see them the way that I first saw them many years ago.

I think everyone has a favorite, special time from a Disney park that they treasure deep within their hearts. It could be the first visit. The first time you were there with someone important to you, or maybe the last. Maybe it’s just an attraction that clicked with you and has now been replaced with something new.

If you fit that description, some part of it at least, I hope you will be interested in what I’m working on. If you have come over from the article on MiceChat you already have some idea what’s happening. If you’re just a fan of the site (and I love you for that!), let me explain. I am embarking on the recreation of Disney Parks at certain cross sections of time, but in dynamic form rather than static. Using the platform of Theme Park Studio I am building the parks so that you can walk around and experience the attractions. Using Theme Park Studios allows me to concentrate on the creation of the actual park buildings and vehicles rather than the task of programming, and hopefully make things move along quicker to you to experience.

The actual purpose of me collecting all these maps and documents has been in the service of this goal to create an accurate historical representation. It just happens that other people like looking at that stuff, too. The Earchives have been building for this ultimate goal.

But enough of me talking, you would probably prefer to see some of the work in progress so far.

When I started out I wanted to work with something that I had a lot of reference material. I have been learning modeling skills during the course of the project and wanted a variety of object types to practice with. My first section was from 2013, modeling Main Street, USA. Keep in mind that the assets are meant to be used in a game engine rather than detailed static rendering, so details are sparse at this point. Generally objects have placeholder materials instead of textures so far. 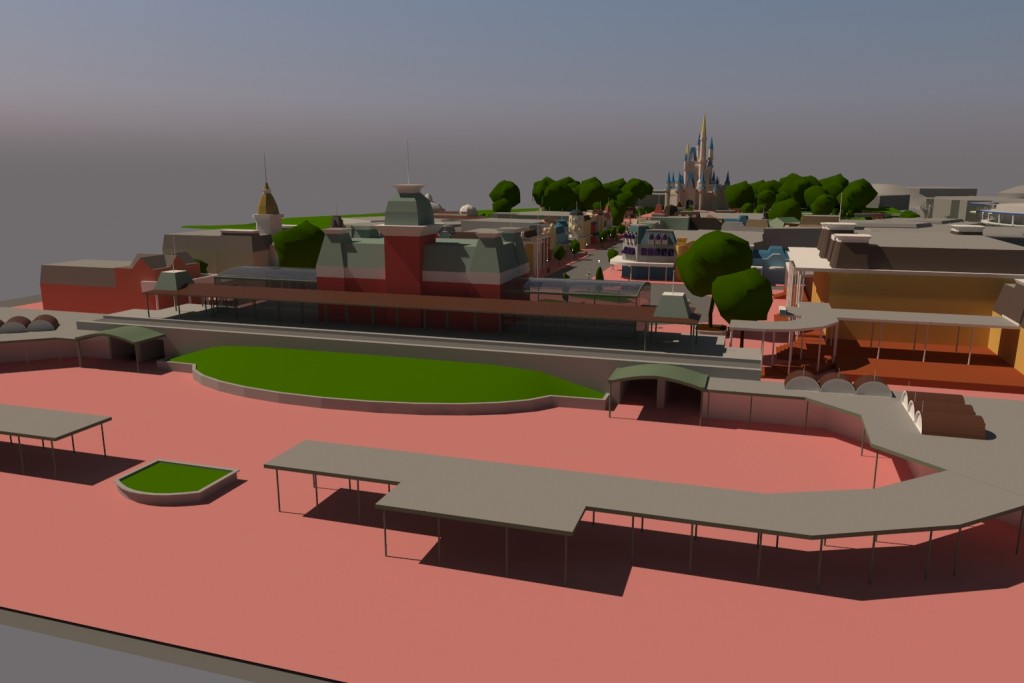 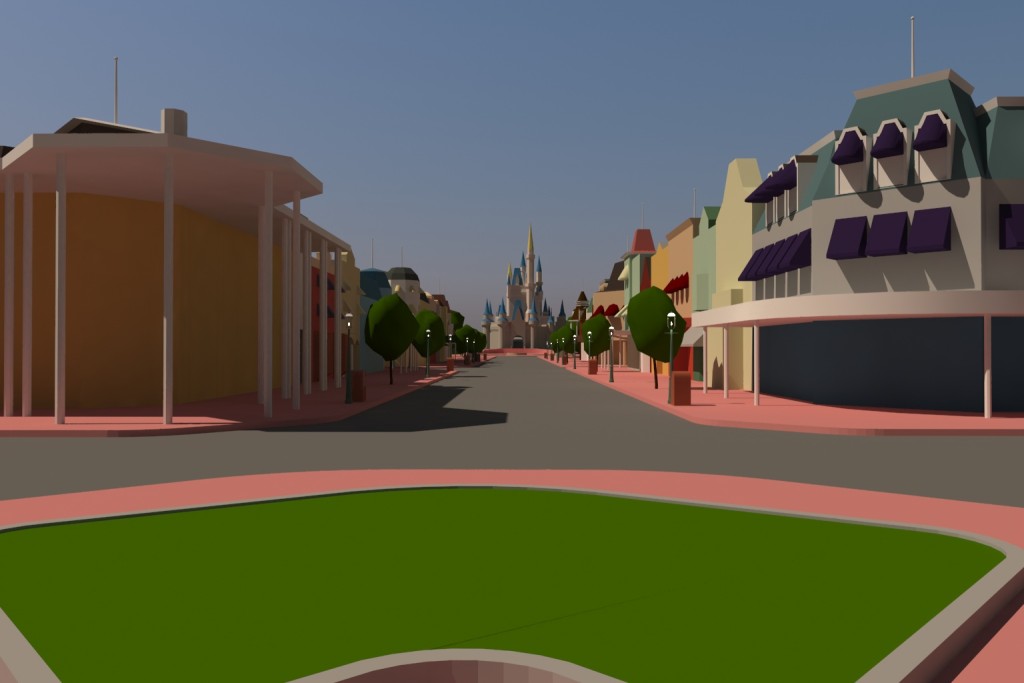 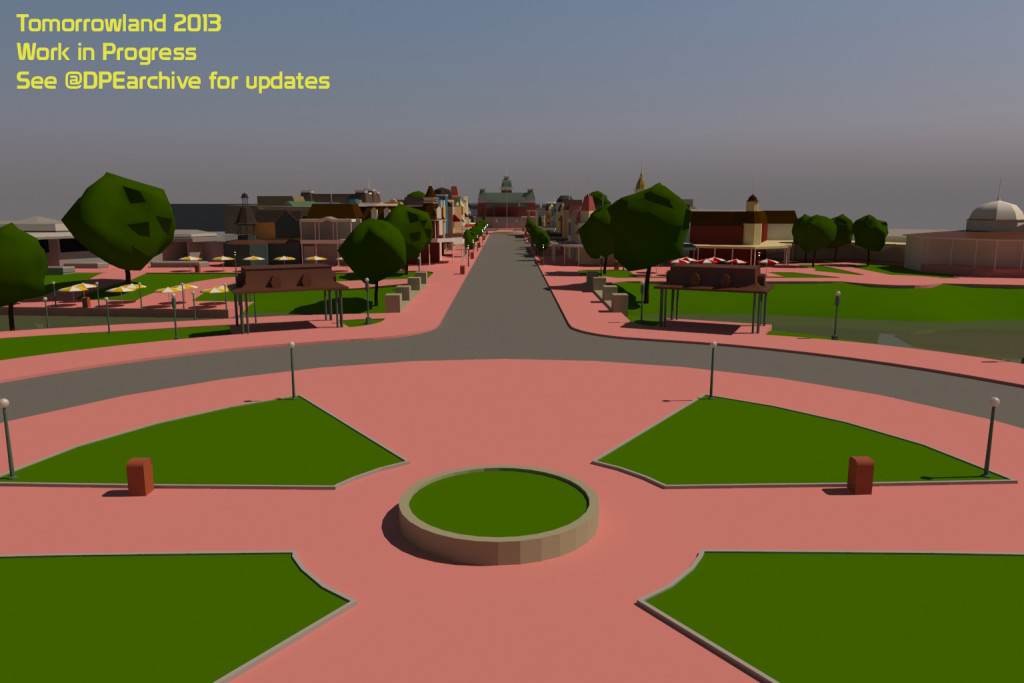 Back Down Main Street

My favorite land in the Magic Kingdom has always been Tomorrowland, so that’s where the next leg of the project has gone. Again, based on the amount of references, I started with the 2013 version. 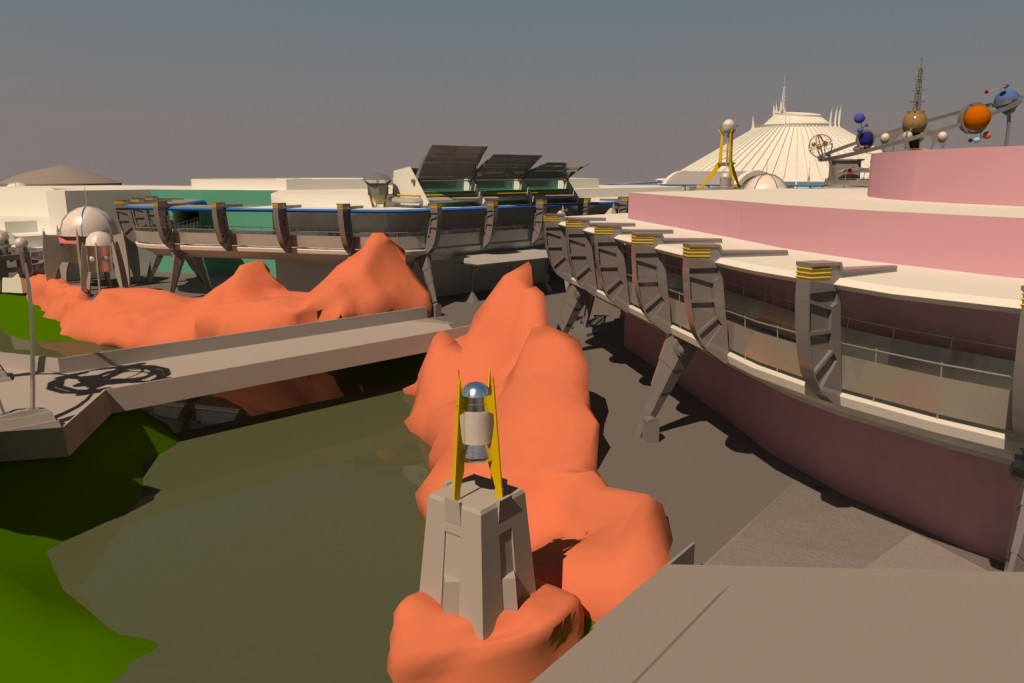 Tomorrowland from a distance 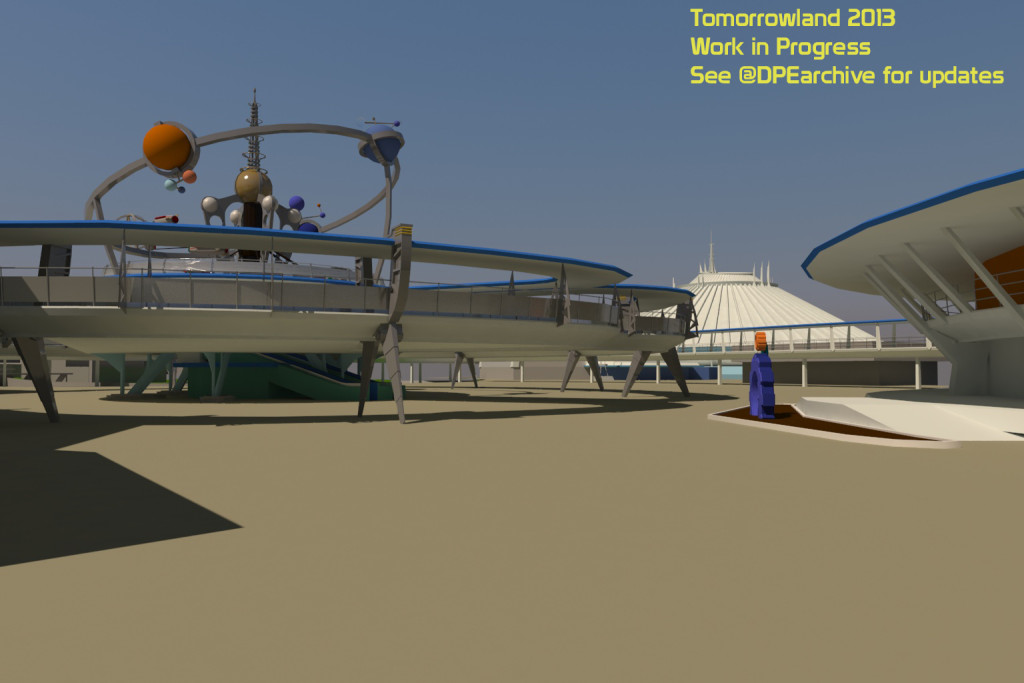 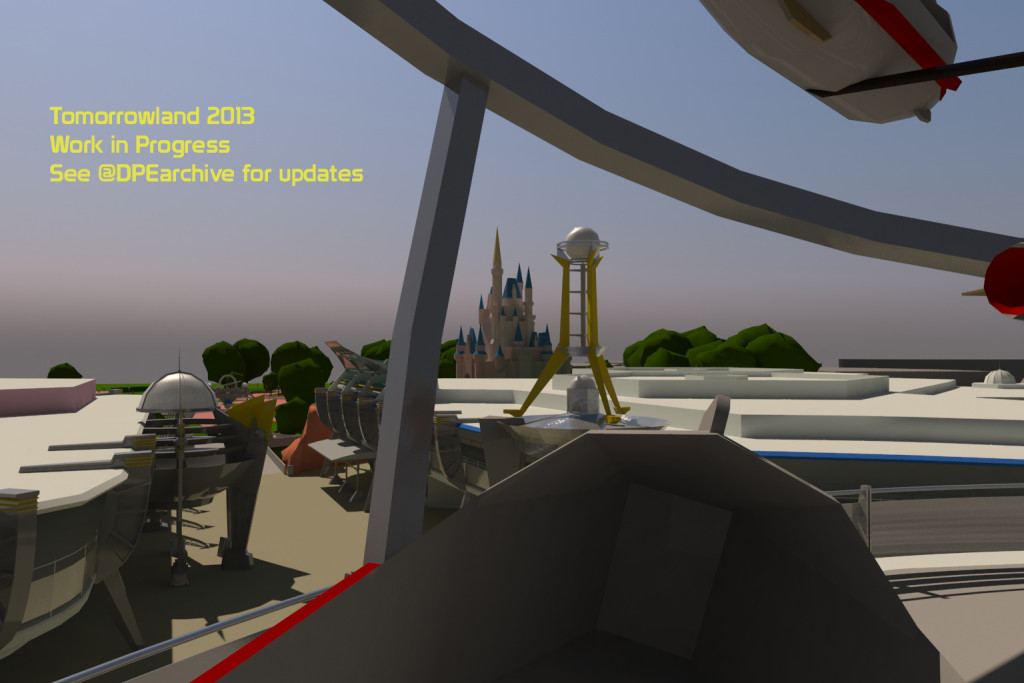 From there I have moved back in time rather than in place. What you will see in the following shots is the first area that will be open for people to experience: Tomorrowland from 1979. This is partly because it’s an era that I loved, and partly because if you want to see modern Tomorrowland you can just go there now! I love the clean lines of the old Tomorrowland, and especially the monolith towers that stood at the entrance. 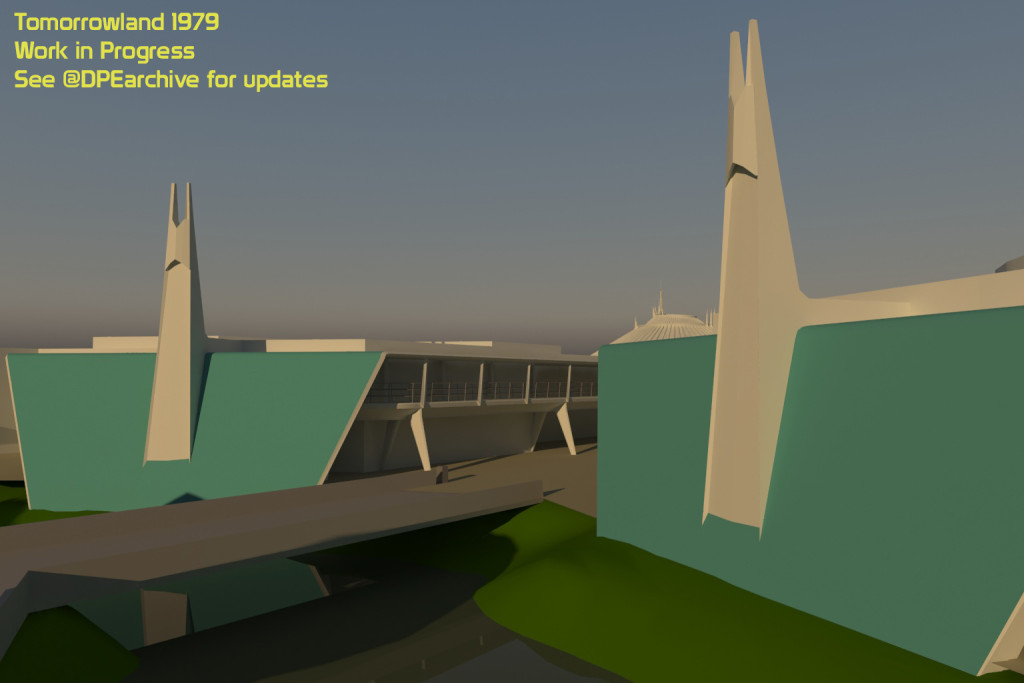 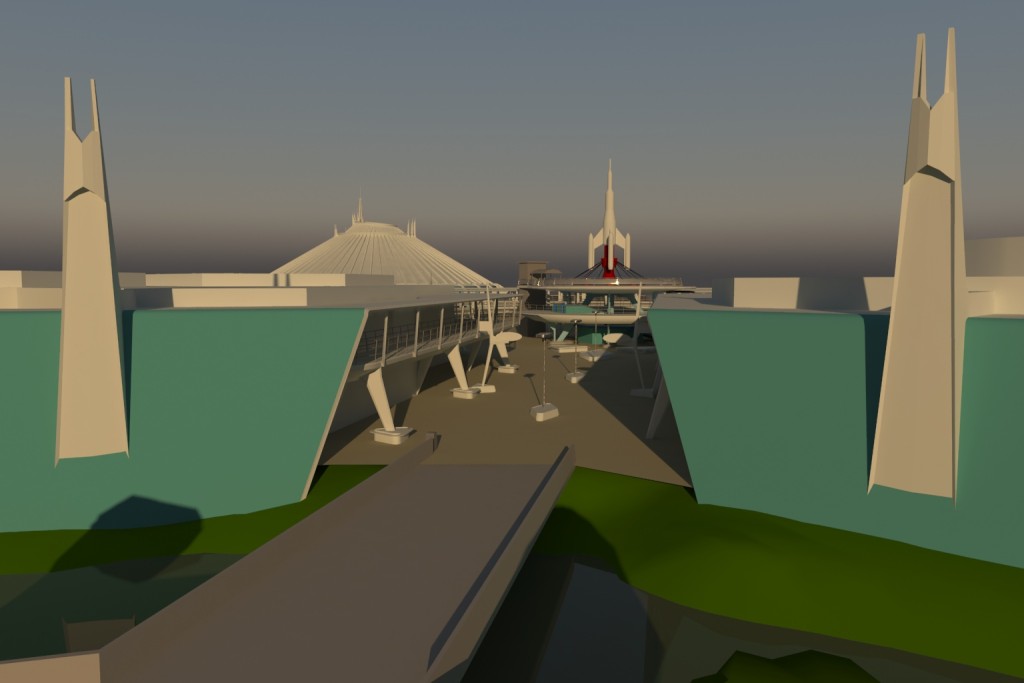 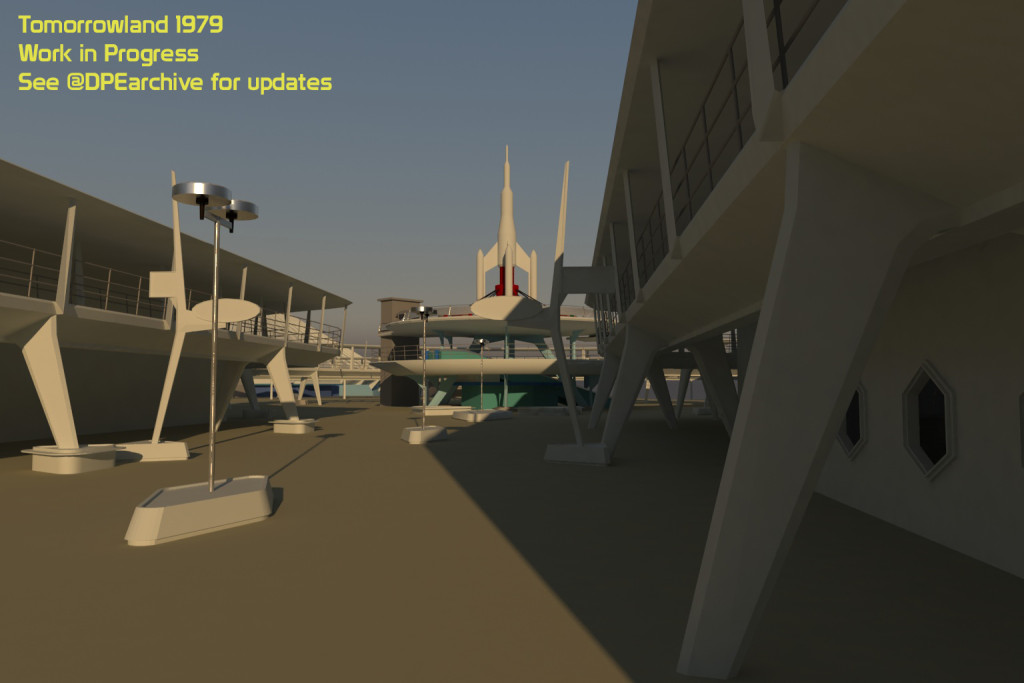 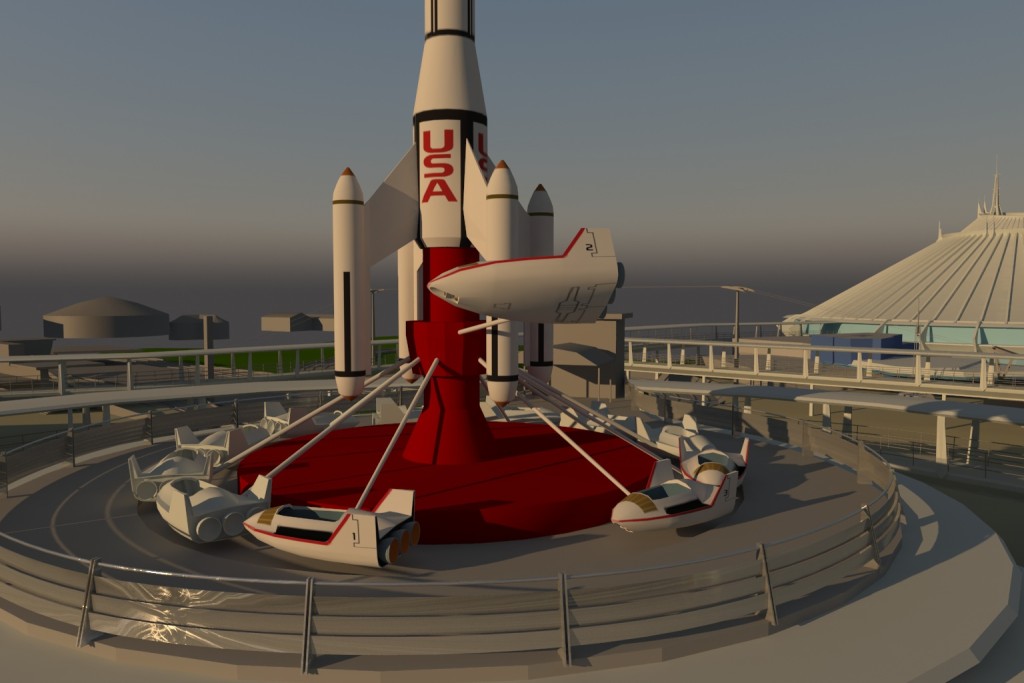 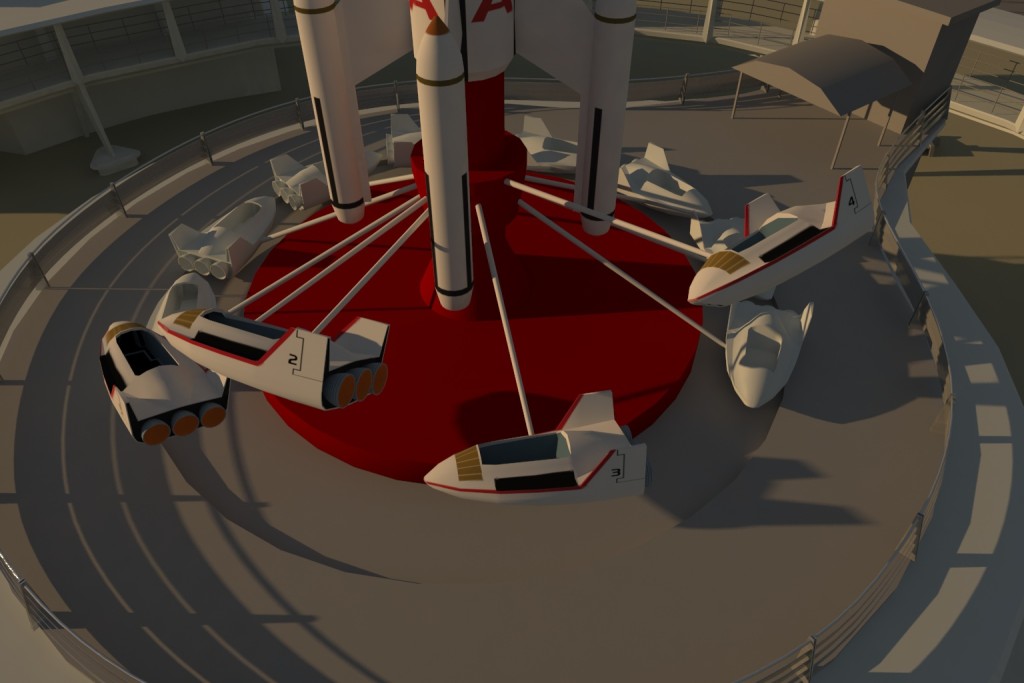 So there is just a glimpse into what’s going on here at the Earchives. I am so excited to share this labor of love with other fans of Disney and Disney history. As experiences reach completion I will be releasing them to you to enjoy and relive old memories. For now I’m planning on these releases to be whenever milestones are reached rather than 100% completion. My goal is to be as accurate as possible, so I welcome feedback from the community whenever you notice things that aren’t quite right. You might have even noticed things in those preview shots that were wrong…a lot of them I’m already working on but don’t hesitate to say something regardless. Most importantly all of this will be available free of charge, as a way of giving back to the Disney Parks history community.

Up until now I have not said anything publicly due to the development calendar for Theme Park Studio, in particular the Live Parks module that allows an MMO type experience. Now that the news is public I will be posting progress on a regular basis. Going forward most of the day to day development updates will be on the Twitter feed @DPEarchive, so if you want to keep abreast of the current state of the project that’s where you want to follow. I look forward to meeting you in the virtual Tomorrowland past!

Lastly I would like to appeal to the community for any expert opinions and resources that are out there. The more we can get, the higher the fidelity of the finished product. Pictures, blueprints, audio, home movies, and any kind of insider documents are welcome and greatly appreciated. Please also share the project with anyone who you think might have an interest since the more people that see it, the greater chance we will run across that perfect reference that answers a nagging question. If you’re interested in helping out, drop me a line. In particular I appreciate any help if you have modeling, texturing or web site development skills. And if you love talking Disney Parks history, well, I love to do that any time! There’s a tremendous amount of work to do…I have no false pretenses on that account. But together we can truly produce a memorable, unique way to experience history.

I will end with one of my very favorite quotes from Walt, that I first heard on the early Disneyland audio tours narrated by him. It seems to be a little less known but has become the mission statement here at the Earchives:

Where Tomorrow is Today,
and Yesterday is Forever