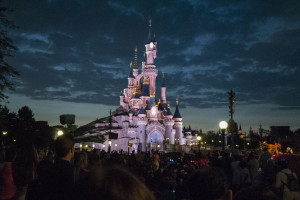 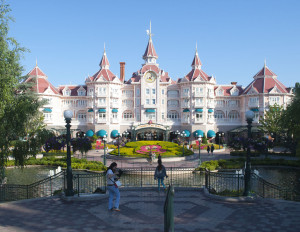 Getting to Disneyland Paris isn’t actually too difficult.  Once you arrive in Paris, this basically involves finding your way to the RER-A4 train line.  The RER is a regional train system that goes through Paris as well as the surrounding suburbs.  A4 is the specific line you’re trying to find.  Make sure you get the A4, not the A2 train, as this refers to a specific branch of the A line that will take you to Disneyland.  There are many good resources about the specifics of getting around, including the two guides I mentioned previously.  Your destination for Disneyland Paris is Marne-la-Vallee/Chessy.

Should you be a supremely lucky individual, your hotel is the Disneland Hotel, and you can’t miss it.  It is literally the front gate to Disneyland.  Just go through Security and towards the front gates.  I am confident that even the most directionally-challenged individual will find themselves in the right place. 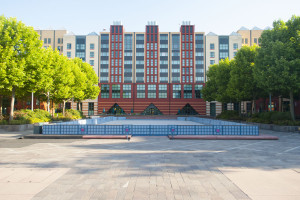 Guests of the New York Hotel, the Newport Bay Club, or the Sequoia Lodge have to go a different way, but it is still within walking distance.  If you find yourself on the World’s Longest Moving Sidewalk because you were foolish enough to follow the signs to your hotel, sadly you are headed the wrong way.  And you will continue to head the wrong way for quite some time, so get comfortable.  After an eternity you will arrive at the parking lot and bus pickup.  Turn around, grab a drink from the vending machine if necessary, and start the round trip back to the plaza.

Eventually you will arrive back where you started.  Now this time, IGNORE the signs directing you to your hotel and head through the security checkpoint toward Disney Village.  Walk all the way through, and when you come out the back side you will be next to the New York Hotel.  Around the small lake found there, the Sequoia Lodge and Newport Bay Club are also visible, but a bit further walk. 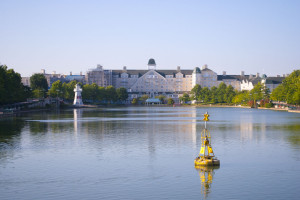 The Hotel Cheyenne and Hotel Santa Fe are both technically in walking distance, but it is a bit of a hike.  The World’s Longest Moving Sidewalk will actually take you in generally the right direction, plus save you some walking at the same time.

If you’re staying at the Davy Crockett Ranch, you must catch a shuttle bus because it is actually a fair distance from the main resort.

One last thing you will notice as you traverse the security checkpoints is that they are run differently than the parks in the US.  In Paris they utilize x-ray bag scanners like at the airport, rather than manual bag searches.  The process is actually quicker (in our experience at least) so the line moves at a reasonable pace.  Disneyland, Walt Disney Studios and the Disney Village are all part of one large, continuous security zone so you can walk between any of them without going through security.  The hotels, train station, and the rest of the world are not, so plan to go through security if your origin is one of those three places. 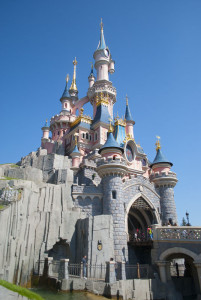 Wanting to take a trip to Disneyland Paris?  Who wouldn’t?  For any fan of the Disney theme parks, going to Disneyland Paris should be a mandatory box on the bucket list.  Getting there, however, is not quite as straightforward as a visit to Disneyland or Walt Disney World.  Over the next few posts I hope to provide some guidance, especially for some of the more practical tips that I never really found until I experienced it in person.

Part of the problem is that specific information is fairly lacking in the United States.  A visit to the US version of the Disneyland Paris site will often leave you a bit confused.  There is a definite lack of specific reservation and touring advice, which can make it difficult to commit to spending thousands of dollars on your own.

For example, for the US parks it is quite easy to pick and choose exactly what you want whether it be hotels, just park tickets, etc.  By contrast the Disneyland Paris site links hotel and park tickets.  I had originally hoped to buy a 2 day ticket as well as 2 nights hotel since we would be arriving late the first day.  But no luck, you have to buy 3 days of park tickets with no option to change it.  Think of it as a prix fixe menu rather than a la carte.

So for the first time I decided to use a travel agent, just to be sure I didn’t completely mess things up.  Major credit goes to Michelle Cunningham at MEI-Mouse Fan Travel for making the process a lot easier.  She did a great job investigating different room and price options to find just the right combination for us.  If you decide to stay at a non-Disney hotel you probably have more flexibility in regards to tickets, etc but since I didn’t go that route I can’t comment on that.

Planning resources are really hard to come by.  Compared to the huge variety of stateside Disney park books, the isn’t much for us here that detail Disneyland Paris.  There was an Unofficial Guide written back in 2010 but that is now hard to find (as well as out of date AND expensive).  I primarily used 2 books:

1. Top Tips for Visiting Disneyland Paris by Kevin Yee.  Available as an e-book ($2.99) or paperback at Amazon.  This book is relatively short but offers a lot of good, practical advice specific to these parks.  Kevin is a regular columnist over at MiceChat and has major Disney credibility.  He covers a lot of the preparation for the trip as well as details of the parks and attractions.  Highly recommended.

2. Independent Guide to Disneyland Paris (from a Former Cast Member) by John Coast.  Also available as an e-book ($6.99) at Amazon.  A much longer text, as well as organized in a fashion similar to typical stateside park guides.  This book seems to be updated on a regular basis, and I purchased the 2014 edition.  Like Kevin’s book it is details the parks as well as getting to/from them.  Particularly useful was the chapter Disneyland Paris for Walt Disney World Regulars, so you know what is similar as well as different.

Both books are quite affordable so really there is no reason to not pick them both up.

Other things to consider during the planning phase:

The next post will discuss some things about money during your trip.  Following that will be information about the parks, hotels and getting around.  I will wrap everything up with a set of Do’s/Don’ts from personal experience.

Today we jump to exotic international locations for Disney Park maps. I have added sections for Eurodisney/Disneyland Paris as well as Tokyo Disneyland Resort. Both sections have only a few maps each, since these tend to be much harder to come across. If anyone reading this visits these parks, I would love to have someone willing to send new maps as they come out, or even older maps if they turn up. As always, I will cover postage and handling, and you will receive credit for the contribution!

Next will be Hong Kong Disneyland. I have a decent number of those maps, more than these two resorts combined.